Building a community through accessible art: Coop Le Milieu and Art Hives featured in The Concordian 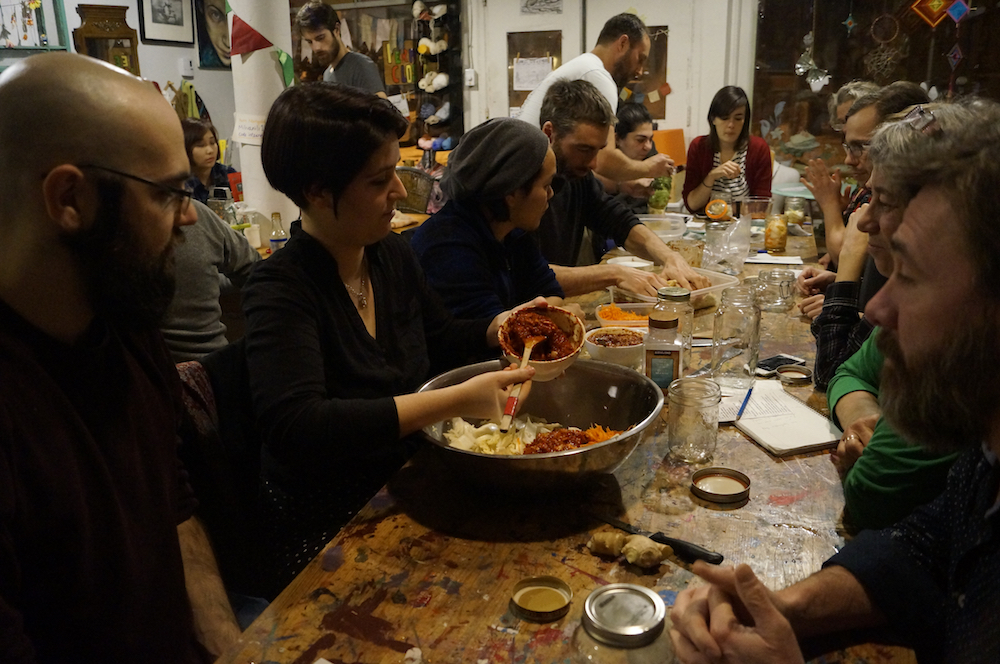 Building a community through accessible art

Le Milieu, a co-op art studio and vegan café, is a major part of the Montreal Art Hives network.

Le Milieu is nestled on the corner of Robin and Beaudry Streets, in a quiet residential neighbourhood of the Village. It is a small, cozy nook, with a bright blue storefront that immediately sets it apart from other buildings in the area. The co-op art studio and vegan café opened in September 2012, and has already established itself as a community hub.

“We wanted two things; we wanted a space that was not about commercial consumption and that was about community building,” said Rachel Chainey, one of the co-founders of Le Milieu. “We [also] wanted to make art-making more accessible to anyone, regardless of their capacities, regardless of age and all that.” Chainey created the co-op with five other women, after realizing they needed a space to share their passion for art and community building.

She was inspired by the work Concordia art therapy professor Janis Timm-Bottos did in New Mexico. Timm-Bottos has spent years developing sustainable, accessible community spaces called Art Hives all across North America. She has worked to develop networks dedicated to fostering relationships and community building through accessible art and creation.

Chainey described Art Hives as “a network of community art studios,” which can be set up in any public space. Concordia has been the base from which the Art Hive initiative in Montreal operates.

Le Milieu’s café and workshop components are not typical features of Art Hives, but they lend themselves well to the community building aspect that is the backbone of the entire initiative. Chainey also explained that sustainability is extremely important to the Art Hive movement. By using second-hand materials, the Hives are not only reducing waste, but are also easier to implement and maintain in a variety of spaces.

Although it has received some assistance through government funding, Le Milieu collects donations and is mostly volunteer-run. Chainey emphasized that, since the beginning, members of the Art Hive network and the community have stepped up to contribute their services. People from all walks of life are drawn to the co-op for a variety of reasons—be it their love of art, cooking or entrepreneurial endeavours.

At the moment, Le Milieu has about 35 volunteers and nine board members. Chainey said the co-op has evolved “beyond what [she] had imagined,” which is in part due to the rotating group of volunteers. Members come and go, allowing space for new energy and ideas.

One feature of the co-op that has consistently attracted volunteers and customers alike is its ongoing series of workshops. Everyone is encouraged to partake in the workshops or even host their own. Topics vary based on what the community responds to and what skills the volunteers want to share.

Vivienne Tam, who has volunteered at the co-op since last fall, gave one example of how Le Milieu recently responded to the interest of its community members. A fellow volunteer brought her quilting project to the co-op to work on. More and more, people asked how she quilted, what techniques she used and how they could get started. She eventually decided to host a workshop on it.

Quilting is just one example of the skills people who visit Le Milieu can learn. Chainey pointed out that many creative activities, like vegan cooking and high-quality crafting, are often only accessible to middle-class people. By hosting community-centred, affordable workshops, Le Milieu hopes to share valuable skills and foster self-sufficiency.

Tam, currently a graduate student at McGill, heard about the co-op through a friend. She was looking for a place where she could donate her free time that aligned with her passions for art and environmental sustainability, and Le Milieu was a perfect fit. Tam volunteers once a week and hosts the occasional workshop—the latest of which taught locals how to make vegan kimchi. Even on a chilly Wednesday night, the co-op was packed with an eager crowd.

Tam also works as Le Milieu’s soup chef and baker, and often consults regular customers about what to put on the menu. She expressed that she would like to see the co-op host more workshops directed at low-income citizens. Her goal is to help them learn necessary skills in order to become self-sufficient and, therefore, more confident. Even in the past four months of volunteering, Tam has seen the impact learning a new skill can have on a person’s self-worth. “There’s so much pride and joy,” she said, describing the environment at Le Milieu’s workshops.